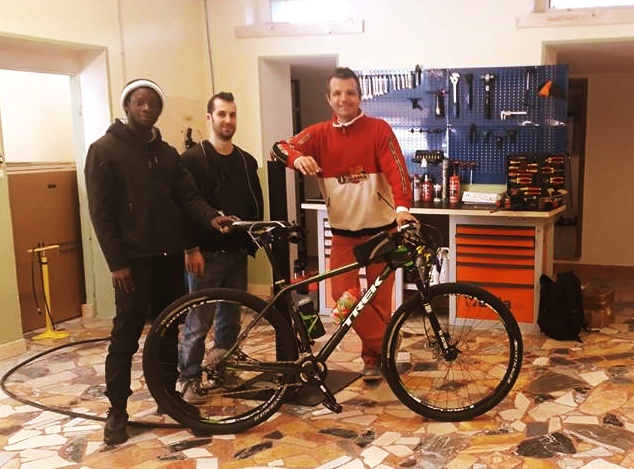 The Teatro Povero di Monticchiello presents a new project Le ciclofficine del Teatro Povero. What is it? We have thought of combining a service for electric and non-electric bicycle lovers with a project of integration and integration into the world of work. And therefore: from today you can come and visit us also in this new location in Bagno Vignoni!

At the moment we can rent 16 electric bikes, some of which are child-sized, plus everything you need to enjoy a nice ride through the hills of the Val d’Orcia! To welcome you you will find our Marco, Lamin and Leonardo.

The Teatro Povero di Monticchiello is a social and cultural project born in the 1960s. At the beginning of that decade the Tuscan village went through a deep crisis linked to the rapid eclipse of the economic and social system that had characterized its existence for centuries: sharecropping. Work, culture and traditions are rapidly disappearing and the population is halved. Those who by choice or need remain then begin to reflect on the meaning of the rapid transformations that are sweeping their world and their identities. In a country without a theater it is thus decided to gather around an idea of theater in the square: a form of entertainment that will soon become an attempt at a collective and ideal reconstruction of the meaning of one’s life. A form of resistance to the crisis.

READ MORE ON THE POOR THEATER OF MONTICCHIELLO